What our customers say

Thank you very much for the prompt and efficient after sales service (which is when you find out how good a company really is). 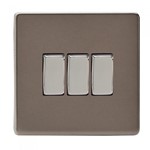 VARILIGHT is the brand name of Doyle & Tratt Products Ltd the leading British manufacturer of dimmer switches and decorative switches and sockets supplying the UK retail market, the trade and OEMs. The launch of VARILIGHT's international range has enabled the company to establish a presence in other European markets, the Middle East and Africa.

The Horsham-based business has been manufacturing dimmer switches since its conception in 1972. It was Dr Tony Doyle's wife Carole who suggested that his original drill speed controller would be better employed to control the brightness of domestic lights and the Varilight dimmer switch was born. Originally this was a cottage industry with the Doyle and Tratt families keeping pace with initial sales demand by making the dimmers themselves. It was not until the first contract with a major retailer was secured some years later that new arrangements were made for production to be increased. This freed up the four directors to devote more of their time to sales and new product development.

Since this time there has been a constant need to re-evaluate the dimmer switch as new technology and, latterly, energy-saving prerogatives have brought new generations of new light sources to the market. These developments have made the technicians at Varilight experts in dimming. In recognition of this expertise, Doyle & Tratt Products Ltd was awarded the UK's most prestigious recognition of business achievement, The Queen's Award for Enterprise in the category of "Continuous Innovation and Development", in 2005. This accolade rewards the winner for demonstrating substantial improvement in business performance and commercial success as a result of their technological innovations.

The company's ability to diversify through innovation is demonstrated by the development of the world's first truly dimmable compact fluorescent lamp which was launched in 2006. This revolutionary technology combined the energy-saving properties of fluorescent lamps with those inherent in a dimmer switch. Meanwhile the dimmer switch continues to evolve with the new generation of V-Pro intelligent dimmers, including remote control versions with scene setting capabilities, delivering superior control of challenging loads such as dimmable LEDs. In recognition of innovation in lighting and lighting control, Varilight was the inaugural winner of the "Innovation in Lighting Design" award at 100% Design in 2007 and a "Decade of Design" finalist at the Lighting Design Awards in 2012.

The VARILIGHT brand is synonymous with quality, choice, value and innovation not only in technology but also in leading the market in on-trend decorative finishes across the comprehensive VARILIGHT range of wiring accessories.