Are you ready for the NEW smoke & CO alarm legislation? 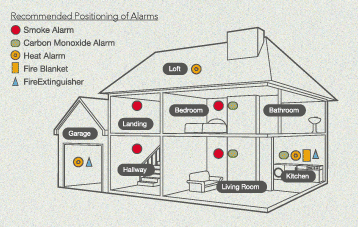 What you need to know so far:

It was announced on 11th March 2015, that new legislation will come into force on the 1st October 2015 that concerns landlords of residential premises. There are still lots of details to be confirmed, but Ryness will keep you updated as more information comes through.

What we know so far:

•Private landlords will be required by law to install working smoke and carbon monoxide alarms in their properties in England
• This new legislation will come into force on 1st October 2015
• There will be penalties of up to £5,000 for those that flaunt this new rule
• Local authorities will enforce this legislation
• Landlords must fit a working smoke alarm on every storey of the property
• Landlords must fit a CO alarm in every room with a solid fuel burning appliance
• They must be tested and in working order as each new tenant moves into the property

Who will the new legislation cover?

This new legislation will cover private landlords. Communities Minister Stephen Williams said: “we’re determined to create a bigger, better and safer private rented sector – a key part of that is to ensure the safety of tenants with fire prevention and carbon monoxide warning.”

We would recommend that any type of landlord (private or social) should recognise the duty of care they have for their tenants to install smoke and carbon monoxide alarms.

It should be recognised that this new legislation also covers:

• Rented land with accommodation
• Mobile accommodation, such as boats/watercraft, caravans/mobile homes
• Temporary living accommodation
• Holiday lets
This new legislation will be for England only. Landlords in Scotland are already required by law to install smoke and carbon monoxide alarms under existing legislation.

What needs to be fitted and to what standards?

It is the British Standard BS 5839-6:2013 that is regarded as the standard to adhere to when fitting smoke alarms and BS EN 50292:2013 when fitting carbon monoxide (CO) alarms in residential/domestic premises. These define the type of alarms that require fitting and where they should be sited when complying with building regulations.